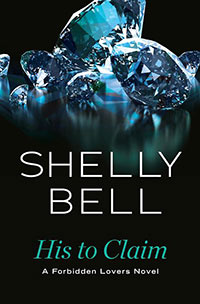 "This Fifty Shades–flavored tale is a well-written, action-packed, and full of charm, wit, and suspense."―Publisher’s Weekly on His to Claim

Fate brought them together. Family could tear them apart.

Ryder McKay may be a playboy, but he’s never been a fool. Not until he met the woman he simply knew as Jane. For one night, he dropped his guard, but in the morning she disappeared—along with a copy of his top secret technology.

When it ends up in the hands of his biggest enemy—his father—Ryder knows without a doubt he’s been betrayed. And when he finds Jane again, a year later, he can’t decide what’s worse—that her mother is marrying his brother, or that he still finds Jane irresistible, despite the fact that she’s a liar, a thief, and his father’s latest protégé.

Jane Cooper does have a secret, but it’s not the one Ryder thinks. As their rekindled passion changes into something deeper, they’ll have to work together to untangle a web of lies and corruption that will shatter everything they thought they knew about their pasts. Because Jane’s not the only one with a secret—and this secret is getting people killed.