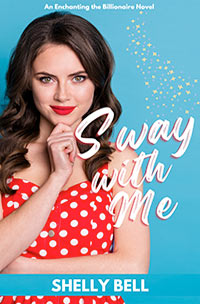 Sway With Me: An Enchanting the Billionaire Novel

Portia Dubrovsky never believed her mother’s tales about fate and magic—until meeting Ryan the morning after dreaming about him and the mansion they’ve just inherited. But the inheritance comes with a catch. Portia and Ryan first must live together in the rundown house for three months. Craving a permanent home of her own, she’ll do everything it takes to make it hers, even if it means sharing a house—and a bed—with a complete stranger.

After losing his fortune, Ryan doesn’t need a money pit, especially one that might be haunted. He just needs money. He’ll prove to his family he’s not the irresponsible playboy they believe him to be. But when getting what he wants means destroying Portia’s dreams, Ryan will have to decide how far he’s willing to go. Because now that he’s got Portia in his life, he intends to keep her there…permanently.

Excerpt from Sway With Me

Ryan rose from his chair and settled his button George's desk immediately in front of her. "Are you honestly willing to throw away two-million dollars based on the condition we have to live together?"

Not good. Now she had a direct view of the slight bulge behind his zipper. She gulped and clamped down her budding arousal.

He smiled down at her. "I promise you, I don't bite. I'll put the toilet seat down. I always squeeze the toothpaste from the bottom. And I'll rinse out the sink after I shave."

Such a sweet talker. No way could she allow him to get the upper hand. If this was going to work, she'd need to assert herself and prove Portia Dubrovsky would not be intimidated.

She stood, wedging herself between his spread legs and looked at him face-to-face. "It's not that. I'm not comfortable with the idea of living with you."

His lips pressed tight for a moment before they relaxed into a grin. "The house is huge. Five bedrooms, three and a half bathrooms, plus a bunch of other rooms for whatever your heart desires. We won't ever have to see each other if we don't want to. It will be like living in the dorms at college, only with less beer and better food."

He smelled like soap and man, fresh and clean from the shower, without a hint of cologne masking his true scent. She'd always preferred a man's natural scent over a manufactured one. Unfortunately, Ryan's intoxicated her, undermining the firm hand of control she so desperately needed to maintain with him.